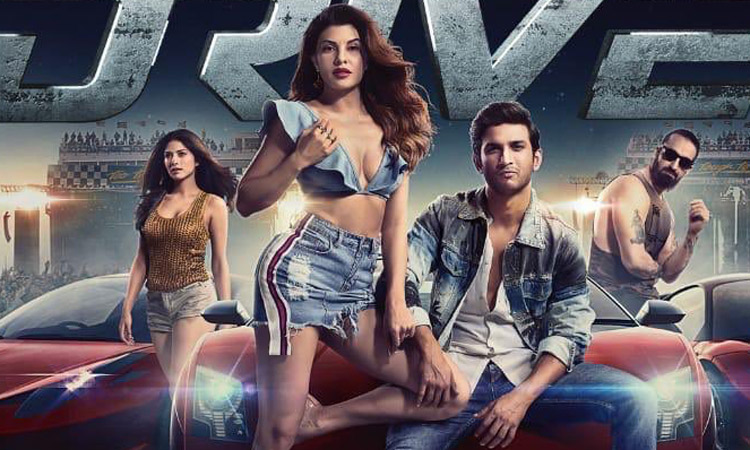 DRIVE has now finally got a release, that too on an OTT platform. As a result, there’s a lot of negativity surrounding the film. So is DRIVE really as disappointing as believed? Or does it turn out to be a fine entertainer? Let’s analyse.

DRIVE is the story of a group of thieves planning the biggest heist of the country. Tara (Jacqueline Fernandez) runs a courier company in Delhi and specializes in illegal transfers for criminals. She is aided in this by Bikki (Vikramjeet Virk) and Naina (Sapna Pabbi). The trio, besides indulging in street racing, are also focused on finding a thief named King (Sushant Singh Rajput). He operates alone and robs in style. After stealing, he leaves the name of the place where he would next make the heist. After robbing a jewellery store, he hints that his next target is Rashtrapati Bhavan! Irfan (Boman Irani) from the PMO gets startled on getting this information. He teams up with Vibha Singh (Vibha Chibber), director of the monetary restrictions department and his junior, Hamid (Pankaj Tripathi) in ensuring that King doesn’t come to rob what is the most secured and one of the most important institutions in the country. King however bumps into Tara, Bikki and Sapna and after he finds them trustworthy, King tells them about his real identity. At the same time, Tara also expresses her wish of robbing Rashtrapati Bhavan for a special reason. She has found out that Vibha takes a 40% cut from those on whom she initiates a raid. After getting her share, she gives the accused a clean chit. Vibha has discovered a secret chamber in Rashtrapati Bhavan where she has stashed all the unaccounted wealth. Tara wants King’s help in robbing this hidden treasure. However, the security at Rashtrapati Bhavan is unparalleled. The aim is to enter the palace, dodge the security and CCTV cameras, locate the loot and take it out of the Bhavan. What happens next forms the rest of the film.

Tarun Mansukhani’s story is poor and is a bhel puri of various films like RACE, DHOOM, FAST & FURIOUS, OCEAN’S ELEVEN, SAAHO and even Karan Johar’s earlier forgettable film, UNGLI. Tarun Mansukhani’s screenplay doesn’t make the desired impact as it’s very difficult to comprehend. There are twists and turns every 10-15 minutes but instead of adding to the film’s charm, it ends up getting on viewers’ nerves. Tarun Mansukhani’s dialogues are simple and straight forward.

Tarun Mansukhani’s direction is nothing great. He tries to do an Abbas-Mustan but fails miserably. The film lacks emotional touch. You don’t really root for any character as you don’t feel for them. A bit of Tara’s past is hinted at but that’s about it. A few developments are bewildering. The track of Arjun (Anuj Jain) is difficult to understand, especially how he managed to get into Tara’s gang. Surprisingly, Tara and his team don’t kick him out despite knowing that he’s an undercover officer! The flow of narrative is also fractured by two songs. Shockingly, the ‘Makhna’ song comes up all of a sudden. For no rhyme or reason, Tara and the gang head to Israel. No explanations given! The makers, at the most, could have added a voiceover of Tara telling her gang that they should take a break for a few days but alas!

DRIVE starts on a fair note. The beginning scene instantly reminds of FAST & FURIOUS’s street racing scenes. But there’s a nice surprise as one expects the winning driver of the race to be Sushant. Instead, it’s Jacqueline who emerges from the car. The way King hoodwinks Tara’s men at the jewellery store and how he gets the seized car back from the cop also keeps the interest going. The trouble starts soon enough as the film gets too complicated or too unconvincing. The second half is focused on the gang trying to rob the treasure from Rashtrapati Bhavan. The manner in which they easily get access to the place is very hard to believe. Also, the various twists and turns instead of impressing viewers end up confusing them. A lot of questions remain unanswered till the very end.

Sushant Singh Rajput fails to give his best. In scenes where he is supposed to give the see-I-am-so-smart cool smile, he ends up looking quite awkward. Jacqueline Fernandez in fact is much better. She looks convincing as the leader of the gang. Moreover, she also exudes considerable oomph. Vikramjeet Virk does well, as per his character requirement. Sapna Pabbi has a great screen presence and acts well. Boman Irani is dependable as always. Pankaj Tripathi is apt for the part and even raises few laughs. Vibha Chibber suits the character. Same goes for Kaustubh Kumar (Raj). Anuj Jain is hardly there. Major Bikramjeet Kanwarpal (Inspector Rathore) is decent.

Music suits the mood of the film but doesn’t have a shelf life. ‘Karma’, played in the opening credits, is the best of the lot. ‘Makhna’ is forced into the film. Same goes for ‘Prem Pujari’. ‘Black Car’ and ‘Tu Jaanta Nahi’ are relegated to the background and are forgettable. Qaran’s background score is stylish.

Vishal Sinha’s cinematography is sans complaints. But in the Israel scene, the lensman should have captured the beauty rather than just going for BTS-style camerawork. Parichit Paralkar’s production design is quite good. He had a challenging task at hand as he had to ensure that the sets resemble the various rooms and chambers of Rashtrapati Bhavan. In that regard, he succeeds in most parts. Fluiidmask Studios’ VFX, however, is very tacky and fake. Stefan Richter and Vikram Dahiya’s action is nothing great. The film ideally should have had more in the name of action other than just car chase scenes. Samidha Wangnoo’s costumes are very rich and appealing, especially the ones worn by Jacqueline and Sapna. Tarun Mansukhani’s editing is average.

On the whole, DRIVE gives a déjà vu of many other films in this genre and fails to impress on account of confusing and unconvincing plot. Avoidable