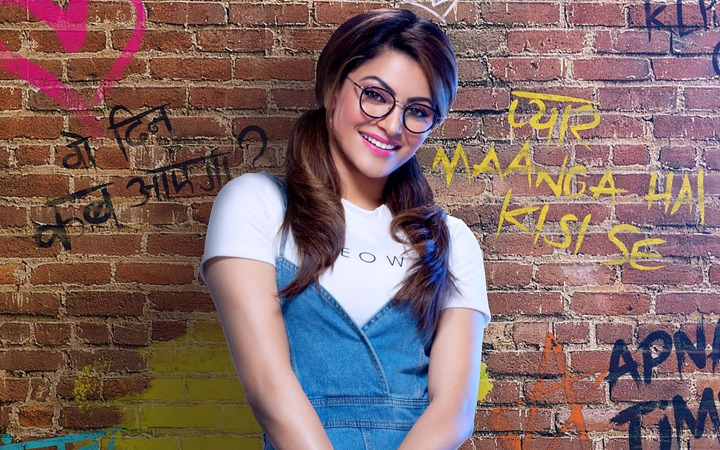 The 2005 Hollywood comedy THE 40 YEAR-OLD VIRGIN has been quite loved especially for its premise – a man desperate to lose his virginity but is not able to do it due to certain circumstances. Bollywood has made its unofficial remake in the form of NAUGHTY @ 40 [2011], starring Govinda. There have been many more Bollywood films where this plot point is used as side track and for comic relief. VIRGIN BHANUPRIYA, starring Urvashi Rautela is based on this idea but it stands out as here, the protagonist is female. So does VIRGIN BHANUPRIYA manage to impress and entertain? Or does it fail to entice? Let’s analyse.

VIRGIN BHANUPRIYA is the story of a girl trying to lose her virginity. Bhanupriya (Urvashi Rautela) is a young, conservative girl from Mumbai. Her parents (Rajiv Gupta, Archana Puran Singh) are separated and are always fighting with each other. She wants to fall in love but all her attempts fail. She starts dating a man named Irrfan (Vikas Verma). He pretends to be an animal activist but one day, he gets arrested for selling stray dogs as animals of international breed. Bhanupriya’s friend Rukul (Rumona Molla), meanwhile, is quite promiscuous and she is trying her best to ensure that Bhanupriya gets laid. In one such attempt, she attempts to hook Bhanupriya with the college nerd Rajiv (Sumit Gulati). Bhanupriya detests him but with no other option, she decides to have sex with him in the college library. Sadly, she gets caught red-handed and the matter reaches her parents. Bhanupriya’s father realizes that Rajiv is rich and will hopefully get a government job in future. He realizes it’s a good match. However, Bhanupriya stops them for taking matters further. Rukul then introduces Bhanupriya to the stud Abhimanyu (Gautam Gulati). He’s called Shartiya as he loves to bet and never loses. Bhanupriya falls in love with him and he too gets attracted to her. One day, when her father has gone out, Bhanupriya calls him home. She tries to get physical but Abhimanyu asks her to consume vodka, which he has brought with him. As Bhanupriya is about to drink, Rajiv lands up at her house and warns her not to drink from the bottle as it’s countrymade liquor filled in the vodka bottle. An angry Bhanupriya kicks him out of the house. Shattered, she goes into the washroom and starts to cry. Her father meanwhile arrives home and drinks from the same bottle. He finishes the whole drink and collapses. What happens next forms the rest of the film.

Ajay Lohan’s story has a lot of potential and could have made for a laugh riot. But Ajay Lohan’s screenplay is very weak. Ideally, the writer should have gone all out and added some maddening moments as the story deserved that. Ajay Lohan’s dialogues are poor. A couple of one-liners raise laughs but that’s about it. Also, there have been a lot of digs on the right-wing ideology and while it works in the Goa hospital scene, in the rest of the film, it seems forced. And a dig on popular actress Rakul Preet Singh is bizarre and added just for the heck of it.

Ajay Lohan’s direction is poor. To give credit where it’s due, one can sit through from start to finish. It never gets unbearable. Sadly, that’s not enough and one needs a lot more in the film to impress the audiences. A few moments are entertaining and funny. The emotional moments fail to move. The biggest issue, however, is with the climax. The director raises tension levels as Shartiya is presumed to have run away. However, Bhanupriya’s reaction after the truth comes out is unconvincing. Also, Rukul’s decision on her pregnancy doesn’t cut ice.

VIRGIN BHANUPRIYA is 1 hour 50 minutes long and starts off with the central plot without wasting any time. Some of the situations in the film are funny, on paper, but doesn’t translate the same way on screen. The track of Rajiv is mediocre. Shartiya’s entry is heroic and one expects the film to get better. Sadly, that doesn’t really happen. The film should have been high on humour and also emotional moments and barring a joke or two, nothing really works. The climax is haphazard and even though the twist is kind of unexpected, the impact is not made.

Talking of performances, Urvashi Rautela has a fine screen presence. She manages to do well as the film’s lead and no complaints in this regard. Rumona Molla gives a good performance but sadly her track in the end does haywire. Gautam Gulati is a bit over the top but that works for the character. Rajiv Gupta hams and it’s sad to see such a talented performer being reduced to a caricature here. Archana Puran Singh too overreacts but comparatively, she is better. Niki Walia (Moon Aunty) is decent. Brijendra Kala (cop) is dependable. Sumit Gulati performs as per his character. Others like Natasha Suri (Shonali), Pranav Verma (Jhanda), Amrit Arora (Pungi), Ashutosh Semiwal (Chukiya), Vikas Verma (Irrfan), Delnaaz Irani (Tarot Card Reader), Rajiv Nigam (Astrologer) and Babita Thakur (right-winger doctor in Goa) are okay.

Amjad-Nadeem’s music is forgettable. ‘Beat Pe Thumka’ is the best of the lot as it’s catchy. ‘Dil Apni Haddon Se’ is shot well. ‘Kangna Vilayati’ is played during the end credits while the title track is missing. The recreated version of ‘Pucho Na Yaar Kya Hua’ is poor. Sanjoy Chowdhury’s background score is unimpressive and has a daily soap-feel. Same goes for Bhimrao Sapkale’s art direction – the sets look straight out of a TV show. Johny Lal’s cinematography is passable. Moushmi Rana’s costumes are appealing especially the ones worn by Urvashi, Rumona and Gautam Gulati. Akshay R Mohan’s editing is fine.

On the whole, VIRGIN BHANUPRIYA rests on a good idea but is spoilt by its writing and treatment.